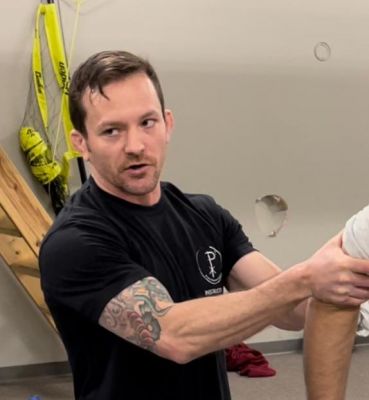 Russell is one of our lead instructors for our Violent Entanglement Tactics (VET) classes.

Russell is a former Special Operations Army Ranger who was assigned to
1st Battalion, 75th Ranger Regiment. He was deployed four times in support of Operation Enduring Freedom and Operation Iraqi Freedom, and served as a Rifle Team Leader and Battlefield Interrogator. He is a graduate of numerous Army and civilian courses, including the Master Tactical Breaching Course. After leaving the military Russell focused on fitness training. He worked for CrossFit Inc. as lead instructor, supervising training courses and developing and refining curriculum. During this time he instructed a variety of military units, both nationally and internationally, as well as federal and state law enforcement agencies.

One of his first experiences on the mat was getting choked by a 140-pound woman. He was instantly hooked. Over the years, he has competed in and won a number of regional grappling tournaments. In July of 2019, he was awarded a brown belt. He is passionate about grappling and self-defense, and is always looking for opportunities to expose his own weaknesses and learn from them.